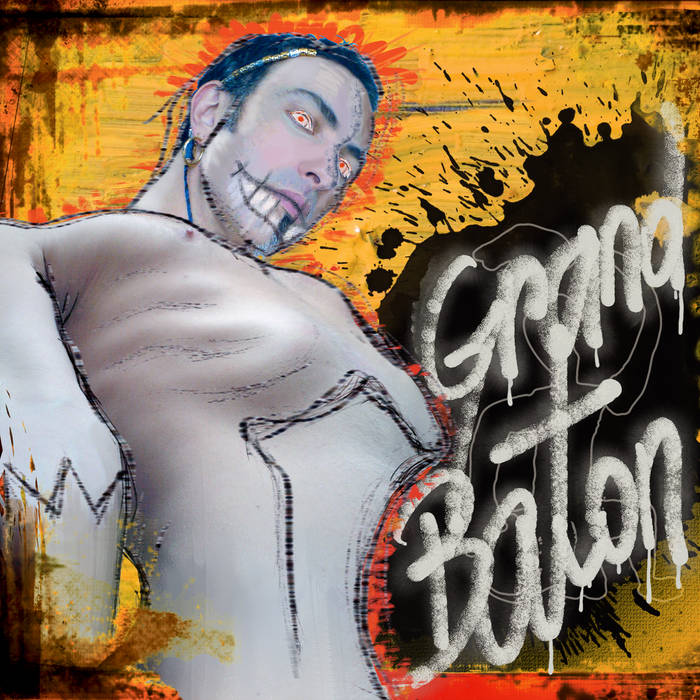 First Grand Baton album, project of french Caribbean native guitarist composer and singer Jean-Christophe Maillard (aka Mbutu), well known for his work in Gwoka music (traditionnal drum music from Guadeloupe); it is a powerful fusion of this heritage with rock music.

For the first time, electric overdriven guitars are combined with the mighty goat skin "slave drum" known as "Ka" for a steady ethno-rooted-pop rock with unusual rythms and melodic lines... the "Rude Ka" music is born.

Lyle Workman (Sting, Alice Cooper...): "every now and again, I'll find music that is really cool - this is one of those times. Great music!!"

Marco Migliari (Peter Gabriel, Deep Purple...): "Bloody great work! I really like it, great playing and I like the album concept. Very, very interesting, and different, too."

Metal Express Radio: "Maillard can be considered as a pioneer regarding this combination of various genres... (his) music brings out the best from his world and the Rock world... (his) purpose in his composing is brilliant and he has a lot to give to the music industry."

Progressive Ears: "Groundbreaking…It is a truly unique and captivating style of music...an impressive new force in the world music scene that has received warm accolades from many well-respected members of the musical community."

Sea Of Tranquility: "The drums, combined with electric guitar and the strong, often-falsetto voice of Jean-Christophe Maillard deliver a universal message...a rhythmic sensibility that will rattle your ears and shake your brain... King Crimson gone tribal, or a more kinetic Peter Gabriel, or maybe a less frenetic System of a Down.

Rockserbia: "A well-experienced musician and author... there's no doubt that he deserve only respect for his author's work and evident original views... could be a one of most original product released during the previous year."

Ectagon (Norway): "Mbutu's music is strong and energetic, with catcy melody lines... makes this album grow from the first time you put it on. Recommended."

Proggnosis: "Le Grand Baton is an excellent album to seek out for listeners of "World music" with a rock edge."

Progressor (Uzbekistan): "The compositions get more and more fascinating as one adjusts to this rather unique stylistic expression... worthwhile investigating for liberal-minded followers of rock music that feel a variety of styles, moods and genres is a treat."


With songs ranging from 3 to 8 minutes, one would say this is world-pop music (listening to the carnival percussion ensemble in the song "Filé",similar to Brazilian drums occasionally featured in Michael Jackson, Paul Simon, Peter Gabriel, Milton Nascimento's songs) or a progressive rock experiment (in the spirit of King Crimson, Yes... talking about the freedom of expression of a song like "Toutlè Dépi Dé Jou" with its electro style intro "Dé Jou Avan").

Initially permitted because it sustained the morale of the slaves, then forbidden because it allowed them to assemble and encouraged a revolutionary spirit, the Ka drum was long a representation of degrading slave conditions – a shameful scar to be hidden. It is perhaps for this reason that it has now been reclaimed as a symbol of the identity and the independence of a people. In the 70s, the Ka drum was as much weapon, of speech and of song, as were the bombs at the time. Now rescued from history, its seven rhythms, with no polyrhythmic form, are what remains of the long journey from Africa.

Rock in the Caribbean:

It had to happen here - because of the unique geography of the Caribbean, under the direct influence of the colonizers’ metropolitan centers and their urban culture, and with the United States next door. These rebel and rural territories, fertilized by a rich blend of ethnicities, have given birth to many major musical styles and rhythmic pulses, each proving that mixing does not mean losing identity. Like the elders who adapted traditional European ballroom dance to their instincts, creating the Biguine, the Plena, the Son, so will the Carribean have its way with Rock.

Recorded and mixed from April 2004 to August 2006 in Guadeloupe (Caribbean), Claret (France) and Paris (France) at "The Living Room", by Gilles Olivesi and Mbutu.
Mastered by Eric Chevet at Masterdisk Europe.
Producing and artwork by Mbutu.

Grand Baton is the brainchild of JC Maillard (aka Mbutu), a multi instrumentalist, vocalist, composer and producer based in New York city, native of the French island of Guadeloupe renowned for is works around the Ka, the traditional hand drum from Guadeloupe. “Le Grand Baton” and “Carnal Carnival“ stand at the crossroads of afro-caribbean music, progressive metal and electronica. ... more

Bandcamp Daily  your guide to the world of Bandcamp

outré black metal, with a Victory Over the Sun interview and music from Liturgy and Jute Gyte.